I found leaving Freya home alone was one of the hardest parts of her puppy socialisation training, but I knew needed to ensure I prevented any separation anxiety in the future.

What Exactly is Separation Anxiety?

There are several levels of separation anxiety and the various behavioural issues stem from these.

Distress: this commonly manifests itself as destruction of surroundings, barking and howling, toileting, etc. Following you around the house until you sit and relax.

Anxiety: This is more serious and needs help from a behavioural specialist. The symptoms include all of those for distress, but can also become ill and/or injure themselves as a result of being separated from its family.

Personally, I believe crating is such a positive way of making your puppy feel secure from day one and also establishes a safe space for them to go when you leave them alone. The crate became Freya’s personal space where she could nestle in her special blanket surrounded by her comfort toys. As puppies initially sleep around 19 hours a day, Freya quickly became used to it and leaving her alone in the house also meant I knew she was safe and not getting up to mischief. 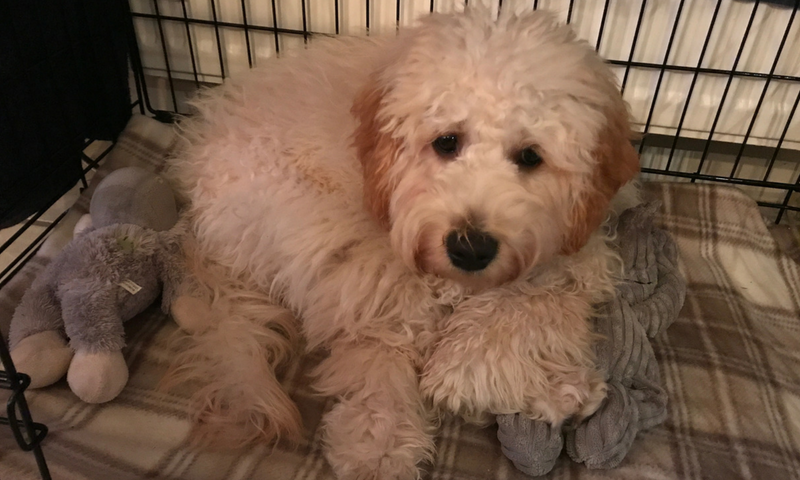 However, I did develop a guilt trip each time I left Freya at home alone during the day. Initially, it was just for 10 minutes at a time, shutting the front door, saying ‘back soon’ as my key words, and making a fuss of her as soon as I returned (although this should be kept to a minimum, but more on this later). That confused look and sad eyes meant she had no idea whether I was coming back – a daunting prospect for anyone let alone a young puppy. It was about building trust and minimising her distress.

As I began leaving Freya for longer periods, I made sure she had been out for a walk (or bounce), toileted and had calmed down. I also made sure she knew I had physically left the house. This was so important for Freya as when I left her for the first time with someone in the house, they told me she spent ages hunting for me. Cockapoos will also spend time sitting by the door waiting for you to return, in extreme cases until you come back. 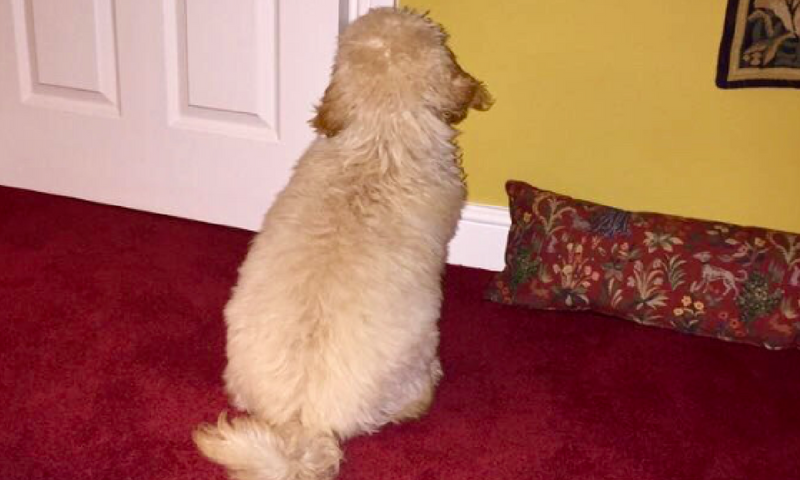 It can be quite hard for your puppy/dog once they spot your departure routines, so to alleviate Freya’s distress I now keep these to an absolute minimum time wise. I leave the radio on and fill her Kong with swirls of her favourite cream cheese with ham to keep her occupied. There are loads of Kong filler recipes to keep your cockapoo happy. Chewing and licking releases endorphins and has a wonderfully calming effect on our canines. If it’s early in the morning I sometimes scatter or hide small piles of Freya’s breakfast kibble around the kitchen for her to hunt out; I never leave her with a chew, bone or anything she could choke on. I’m more relaxed about departure routines when taking Freya with us and it’s hilarious to see her parked on the mat between our luggage and the front door – her way of saying please make sure you take me with you. 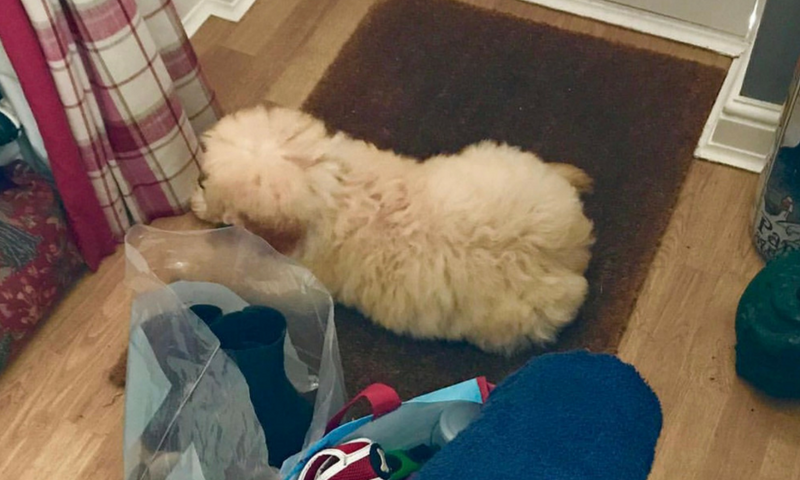 Once you return it’s so much better to reward calm behaviour and to ignore the customary crazy cockapoo greetings. As tempting as it is to have your cockapoo go mad for you as you walk through the door, it’s not considered healthy for them as it encourages their desperate feelings of missing you when you’re not there. Far better to have a happy dog when you have to leave them for longer periods of time, while on holiday for example, rather than pining and miserable. As you can see from the video where Freya spots her Dad walking down the path, we failed on this one!

Once Freya was six months old, she had learnt what she could and couldn’t chew and so her crate was replaced with a comfy bed covered by her crate blanket and with two favourite cuddly toys, tiger and hippo. Initially when we left she was confined to the kitchen, which is quite large and has French windows overlooking the garden. By eight months we had installed a stairgate and she had the run of the whole downstairs.

At eight months she still didn’t like being left home alone, but was able to cope and we had set the building blocks for the future.

Part Two covers leaving your cockapoo with family, friends and pet carers for those times you are not able to take your furry friend with you.

Post Script: Actually Part Two turned out to cover taking back control when it comes to separation anxiety. It appears I was more anxious than Freya!