As a first time puppy owner, I had no idea that crating a puppy was controversial. For me it made complete sense; it meant that while Freya was small and vulnerable, she was secure, safe, and snug and – crucially – I would be in full control when it came to leaving her on her own for any length of time in the future.

Husband Mark, whose family had owned several dogs, didn’t question the fact that I had decided this was the way forward for me personally. Hilary and Ruth had both crated their cockapoos and all I could see were the positive advantages. However, when I encountered the wrath of my brother and sister-in-law, who saw the crate as caging my puppy and extremely cruel, I realised that not everyone had the same point of view.

At the time of writing Freya is now eight months old and was very happily crated (both at home and in the car) until she was ready to go into her ‘big girl’ bed at six months. I simply can’t recommend it enough. I’d read that dogs have a natural instinct to live in a den; they love their quiet time and their own space, especially when you have a house full of people. They need somewhere to go to call their own and know that they are safe and won’t be disturbed. The crate was Freya’s den, filled with her own smells (and initially those of her mother’s) and her favourite toys.

I laid down my own personal rules for Freya’s crate training. Looking back, I think the management of this for a happy puppy was very important. My profession entailed advising clients on communication and the use of consistent messaging. Having four children (three under the age of 17 months at one point), also meant consistency was crucial. With babies and puppies I’ve discovered the most effective way is to start as you mean to go on – be consistent from day one!

From my experience the following would be my advice to anyone wishing to go down the crate training path.

Buy a crate large enough to house your fully grown puppy. Some believe they should be small and confined so that the dog feels more secure, but I felt uncomfortable with this idea – I wanted Freya to have the freedom to move within the crate if she needed to. 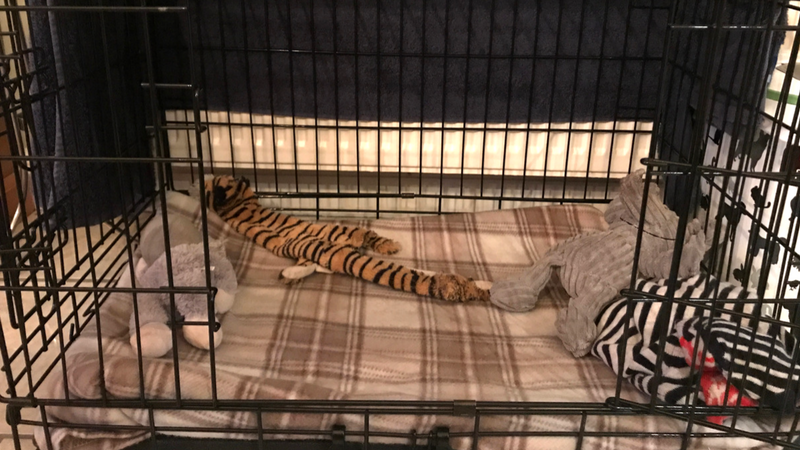 Setting up the crate

I began by positioning the crate in its regular place in the kitchen and lining it with a Vetbed. These are expensive but brilliant for any animal as body fluid such as sweat or urine, drain through the fleece and is captured beneath the rubber lining ensuring maximum comfort for your puppy; the fleece also keeps them warm and cosy. I then covered and tucked in the blanket and added Freya’s tiger, both given to me by her breeder. To help her understand when it was bedtime, I covered the crate with a large towel so that she couldn’t see out of the cage, which seemed to reassure her helped her settle immediately.

Freya was still suffering the effects of her second injection on the first night, which made it easier as she just wanted to sleep and so I gently placed her in the crate and left the door open with water nearby keeping an eye on her (almost glued to her side to comfort her to be honest).

I’d bought puppy pads and placed one within the crate at the side of Freya’s Vetbed, but I wouldn’t bother doing this again; she didn’t use it. Hilary advised me that puppies instinctively wouldn’t soil their den unless they were ill or had an accident – placing a pad or newspaper in the crate would just encourage bad habits. So I began to take Freya outside at regular intervals, praising each time she went to the toilet with the final visit at 10:30 pm when we went to bed. I then shut the crate door and covered with the towel. I set my alarm for 2:30 am and went down to check she was OK and whether she needed a wee, but she really didn’t want to be disturbed so I left her in peace and went down again at 6:30 am.

I was thrilled with the fact that the following day Freya had perked up and when I opened the crate door with coaxing she cautiously came out and I left her to nose around for five minutes before taking her outside in the garden. 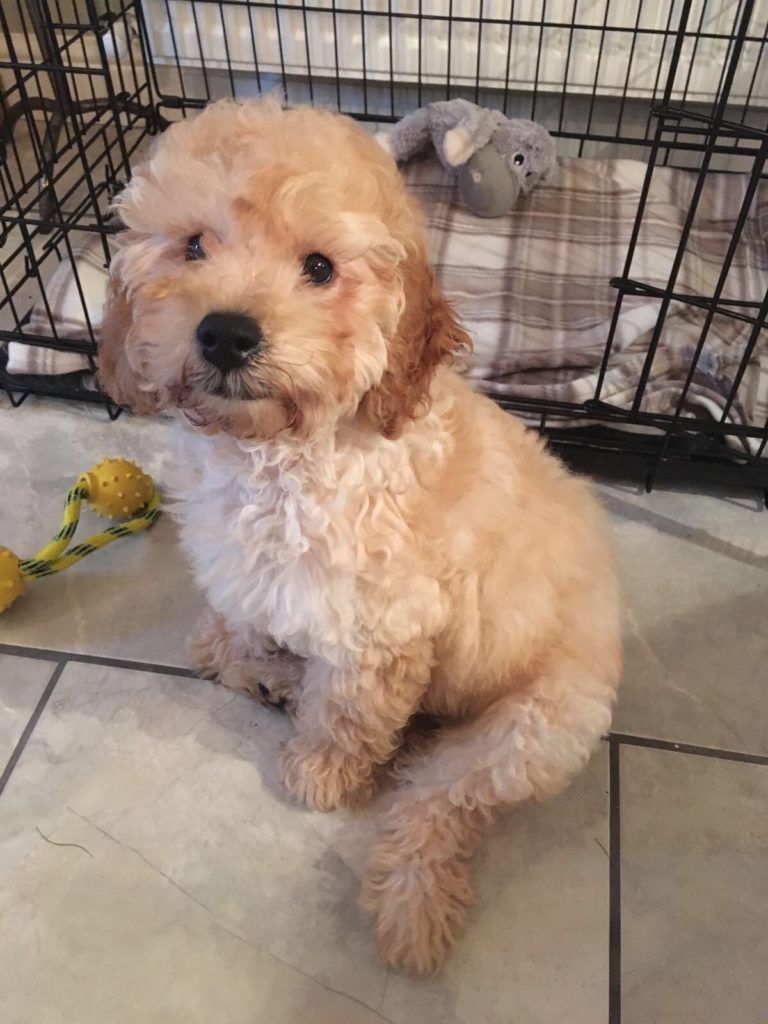 Consistency makes for a settled routine

Consistency made crate training really easy. During the day the door was left open and I encouraged her to sleep in the crate at all times – just like babies thankfully puppies need a lot of sleep! Initially when she was crated at night she cried for a while, but I left her (really important) and after night three she’d learnt the routine and was reassured that we were coming back to her in the morning.

For me crate training was important, certainly in the early days. I wanted Freya to fit into our lifestyle, which meant when we stayed with friends, her bed was portable and she knew this was her private space no matter where she was. I was mindful of the fact that when we overnighted anywhere, those we were staying with may not like a dog on their bed, or on their furniture and so it was important Freya was happy to be left in her crate somewhere convenient in somebody else’s home, or in a hotel room.

I’d read separation anxiety can be an issue with a cockapoo and to leave them alone initially for short periods as early as possible. Freya was my constant shadow and this is where the Kong came in. Each day I left her starting for 5 minutes with the crate door and kitchen door shut and left her with a few kibble biscuits in her Kong*. Gradually I increased this over the next month so that by the time she was four months, she was happy to be left for an hour or so and literally jumped for joy when I returned. I remember standing outside listening at the door and feeling very nervous the first time I physically left the house. The noshing of kibble (which was taken from her daily food ration) kept her occupied and she just settled after this with no problem. It took a while for me to be ‘crate trained’ and relax when I left her. Naturally, I always removed her collar before I left her alone in her crate.

And the biggest advantage for me? 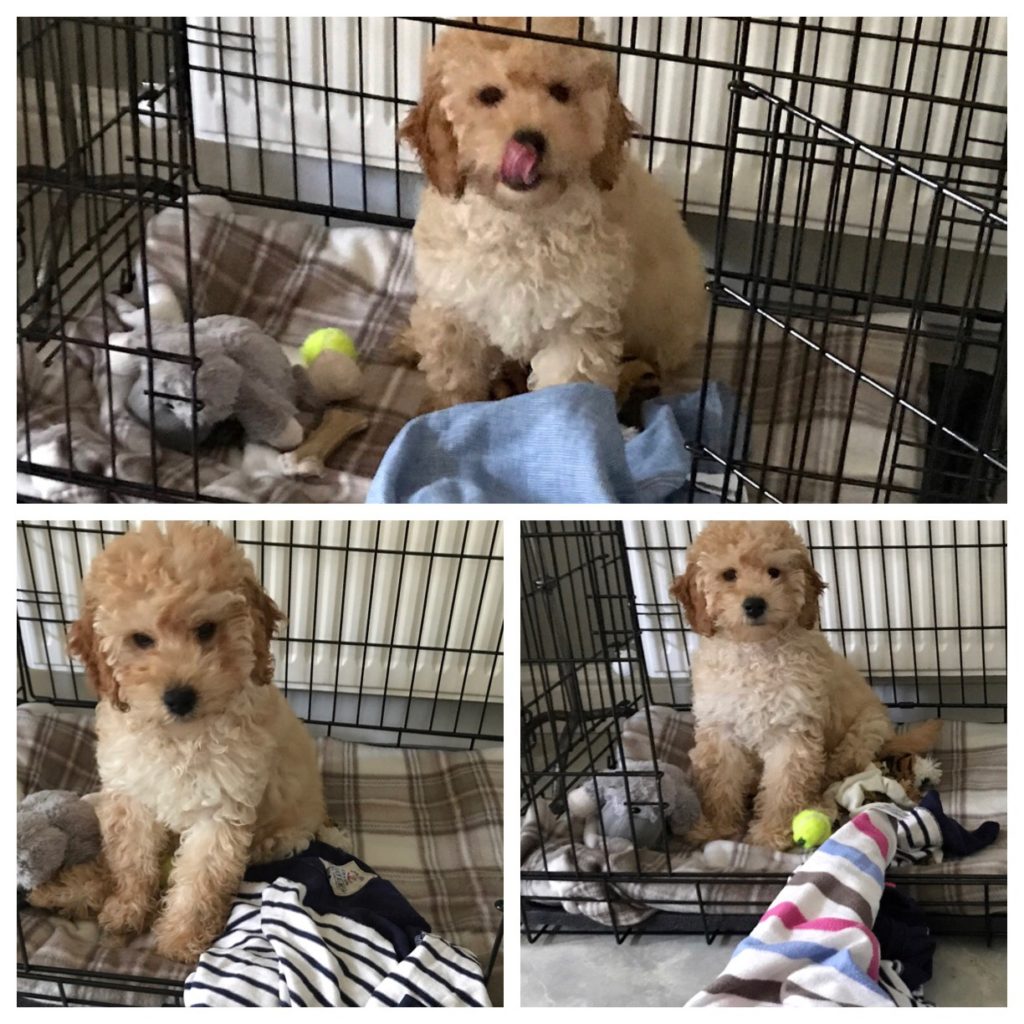 Puppies can’t get up to mischief when you’re not with them along with the bonus that Freya never chewed our furniture, destroyed flooring, or had any of the destructive tendencies puppies appeared to have when left to their own devices. But tips on how to curb chewing  is a later article…

Freya made her crate her personal space – as you can see dragging in all sorts from washing to slippers – and when she chose to take refuge, she was guaranteed safety, peace and quiet.