So Freya’s teenager years have begun. I did hope that all the effort I put in to her puppy training would mean that this would pass me by unnoticed. However, like most cockapoo owners, my puppy has a huge and highly demanding personality, so this was never going to happen.

Apparently dogs begin their adolescence at around eight months – I certainly concur with that one – and mature around their second birthday. Every cockapoo owner I’ve met with an older dog tells me we have to wait until they are three. So teenage years for us cockapoo lovers could be up to 28 months in total – less than my children’s of course, but even so daunting as a complete novice.

Freya is now 10 months and I already have a long list of teenager behaviour she’s adopted: 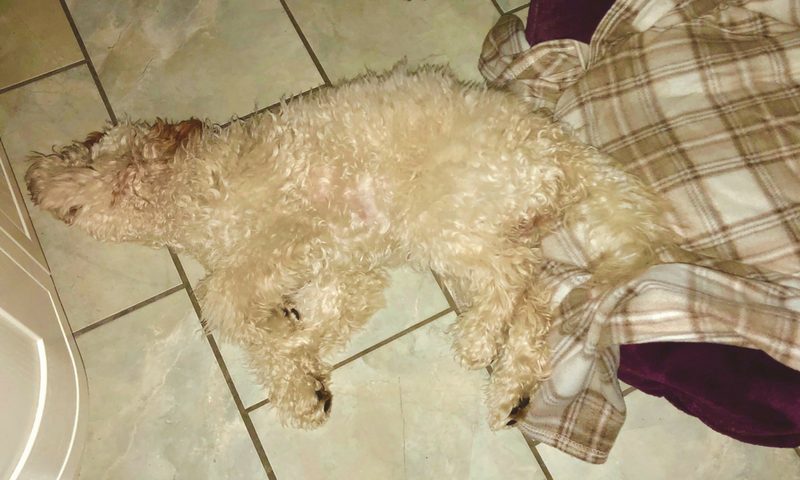 My enthusiastic morning welcome has all but disappeared. The waggy tail and excitable behaviour of Freya’s puppy years developed into a preference to stay in her comfy bed and continue to sleep when I now enter the kitchen.
IMAGE CAPTION: Sleeping beyond 9 am on some days!

Suddenly Freya appears to have forgotten the sit command – the first one she learnt! The little monkey hovers her bottom just above the ground in rebellion. She’s brilliant at waiting for permission to be allowed to run off the lead, but now when I do the 20 steps back using watch command she’ll look anywhere but at me. Treats are no longer as effective – even high value ones. When she’s let off her lead she’d rather run off for her first sniff and ignore the reward for waiting. The challenge position is a common one as well – she knows exactly how to wind me up for attention.
VIDEO CAPTION: Challenging recall and going on to eat deer poo! 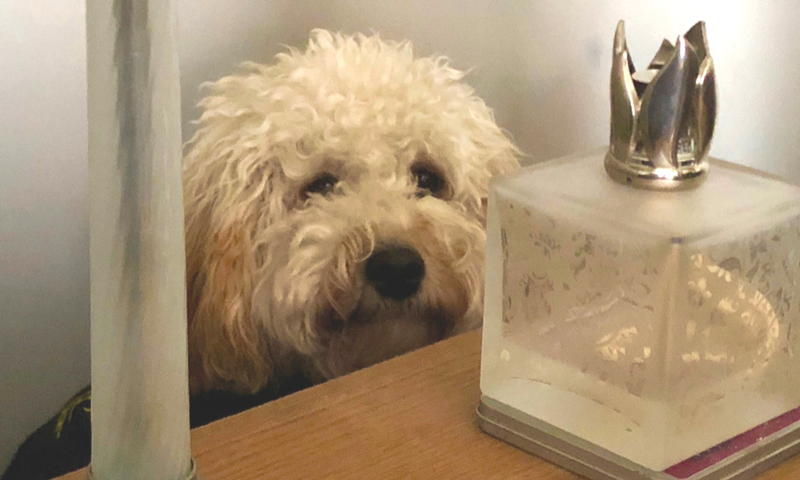 As I worked from home, I encouraged Freya to occupy herself when I needed to concentrate. This was not a problem in the early months as she slept for long periods and was content playing with her toys for 30 minutes or so. No longer – gone is my little puppy who enjoyed looking out of the windows, bouncing round the garden, playing with her toys and sitting contentedly at my feet. Even though she’s walked twice a day for an hour at a time (still following the walking rules), is entertained with trick learning as well a training practice, gets to play tuggy and chasing me around the garden, and visits friends and family, the second I sit down at a computer she starts demanding my attention. And if she doesn’t get it she sulks in a corner, puts herself to bed, or flops down on the floor with huge sighs.
IMAGE CAPTION: Sulking in the corner

Quite frankly her flirting and teasing behaviour is shocking. Biting ears, licking muzzles, pawing and sniffing dogs nether regions before falling down on her back with her legs open. As soon as the poor dog responds she jumps up and sits firmly on her bottom!
VIDEO CAPTION: Teasing poor Jasper – at 11 he’s certainly met his match with Freya!

Around six months old puppies begin to grow in their second set of teeth and this continues with the back ones last to finalise. Freya began to sit and chew at her toys for the first time– she’s never been destructive as I distracted her when young each time she chewed anything inappropriate. Not exactly teenage behaviour, but she started to enjoy gnawing at her tuggy toys from 8 months.

I don’t let Freya get away with anything, just as with my teenager children, it’s important to constantly reaffirm the rules and not allow them to take control. I remind her (gently but firmly) who’s top dog! We started Bronze training this month.

When off the lead on walks, as long as Freya could see me she made the decision as to whether to listen or not. Interestingly, by hiding from view (a Hilary tip) (although I was still able to keep an eye on her through bushes), she was less confident and raced to find me.

I’ve switched to dictate whether Freya has access to all the exciting smells she is so desperate to discover. If she ignores me, I take this away by putting her back on the lead and let her off when she concentrates on my command. It’s tiring, but she’s intelligent and a quick learner. However, I’m yet to manage the spotting of a squirrel or another dog – suspect this one will take until she’s three!

Freya has decided to start being choosy as to what she eats again. Still determined not to cave, and although her diet is now more varied, I want to stick to kibble and so discovered a way to tempt her with out adding anything to it other than a little hot water. She loves the gravy that leaches from the buscuits and scoffs it down. I’ve only just understood why you don’t allow your dogs to graze at their food during the day like cats. As top dog you need to manage their food as means you stay in control. Meal times are set twice a day and the bowl is removed if she’s not eaten it after 20-minutes. This goes for her chews as well! More on feeding a fussy puppy here.

While looking out of the sitting room windows Freya began barking and growling at anything that moved from around nine months. Not a problem when I’m at home as I can gently reassure her when it’s neighbours or friends, but if I’m out I’m conscious it could drive our neighbour mad. I keep her contained in the kitchen/diner when out – she can see onto the garden, but she doesn’t bark at ducks, rabbits and pheasants that frequent the lawn so it’s not a problem.