The day had finally arrived to pick up our puppy – all was ready.

It was a 45 minute drive to Nantwich and when we arrived we had been given a code to enter the grounds. We were greeted by a very friendly man manoeuvring a sit on lawnmower who, having established we’d not been before, guided us to where we needed to go to pick up our puppy.

The estate was immense, surrounded by green fields, with numerous very happy looking Cocker Spaniels running freely outside in the tennis courts. Before entering the building, we had to ‘dip’ our shoes in a solution to ensure we didn’t bring any nasties that could harm the puppies. The room was designed to give the feel of a sitting room with comfy sofas and we joined a number of families who were also collecting their puppies.

The owner was waiting at the door to welcome us with Freya in his arms and this was our first introduction. My initial thoughts were that she looked nothing like her portrait image; her colouring was now more apricot than mink, but by this time she was 11 weeks old and I now know that their coats change constantly as they grow – she was also understandably much bigger. 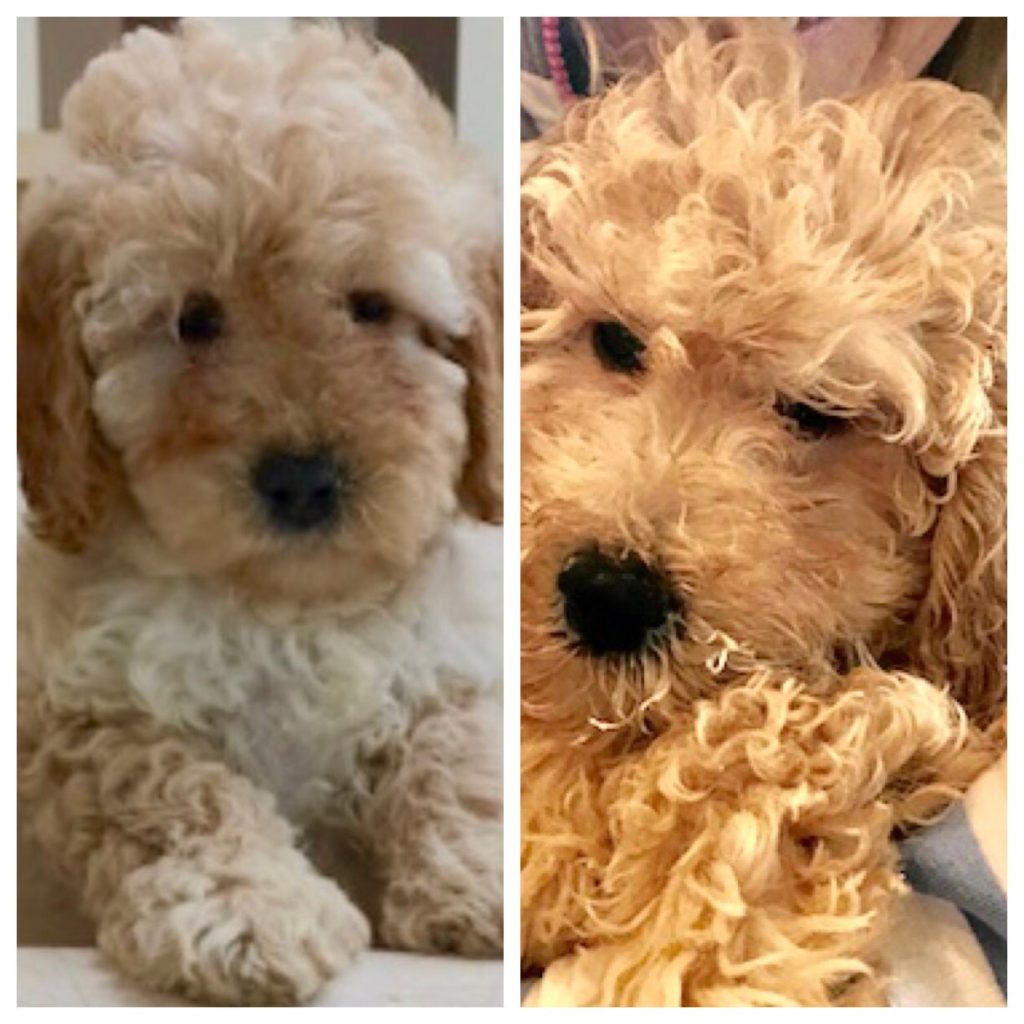 The owner then brought through her Mum Dixie, a beautiful, elegant, narrow muzzled, sable Cocker Spaniel and Dad, a huge (miniature) white Poodle known as Popcorn.

While Freya sat on my knee I felt she was very subdued compared to other puppies. The owner explained that they were often nervous when introduced at the hand over area, but if you put them in the pen with the other puppies they soon come to life. With hindsight, I should have taken his advice and done exactly this.

After giving a short introductory talk, the owner presented us all with a puppy pack, along with a blanket and toy that he said had been with their respective mothers and carried her scent. We paid the outstanding amount and as we left I mentioned to another member of staff that Freya appeared very snuffly and subdued and was she OK. Again we were reassured that all was well.

Wrapped in her blanket and cuddling her ‘tiger’, we drove Freya home where the learning curve immediately began.

Images of Dixie and Popcorn by kind courtesy of Raffles