Out on walks while Freya was a few months old, I was surprised how many people told me they were spaying their female dogs before their first season. This didn’t feel right; surely it was important for a puppy to at least reach puberty and be fully grown before she was catapulted into what was essentially the menopause.

After sifting through copious amounts of online information to enable me to decide what the optimum time was to spay a female dog, in the end I went on the advice of her lovely vet, Dr Dan Walters. Initially Dan questioned me about Freya’s first heat as he said six months was quite young to come into season. After giving a more detailed account (I didn’t go as far as to direct him to my blog article) he agreed she was mature for her age and at nine months (three months after her season ended) she was fully-grown. Dan’s advice was that if I didn’t want Freya to have a litter, this was good time to have her spayed as she was still young and would heal quickly. When I asked him about the advantages of keyhole versus open surgery; he advised that keyhole was preferable for larger female dogs like Labradors where the incision is bigger, but not necessary for small and medium dogs as the entry point was only around an inch long.

The ‘no food after 8pm’ the night before wasn’t an issue. Freya’s evening meal is at 6pm and breakfast is always after her first walk of the day so she didn’t notice the absence of food. This meant we easily ticked the ‘no food’ and ’empty bowel and bladder’ boxes before her appointed time of 9am.

On arrival at the surgery, Dan weighed Freya for the anaesthetic calculation, and we left her in his capable hands. The surgery called me at 1pm to say everything went well and to collect Freya anytime after 3:30pm. We’d chosen the medical T-shirt route rather than the cone for comfort reasons, and she was wearing this when we arrived (my husband, Mark, had come along to help bring her home). It was quite expensive at £20 – a baby vest would serve the purpose just as well – but it was smart, comfortable and proved very effective, so I would definitely recommend this over the cone. We passed it on to her best friend Amber who also found it very comfortable! 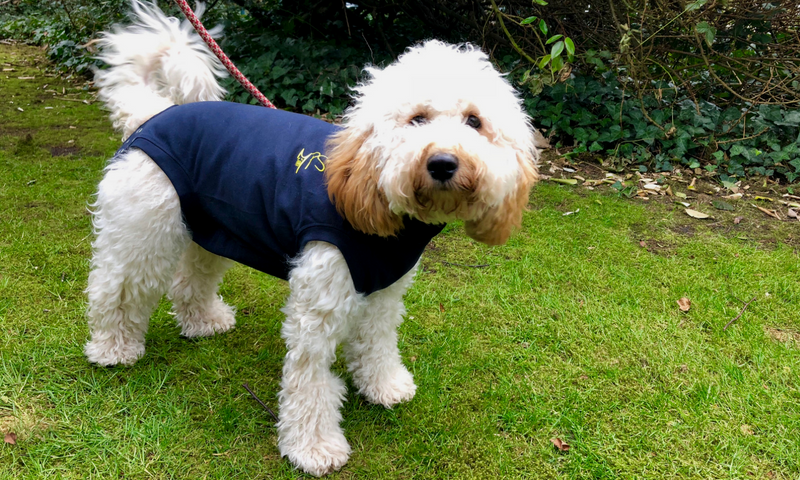 We were amazed at how perky Freya was – she even tried to jump up she was so pleased to see us. She had both a wee and poo outside before we left and she sat on Mark’s knee for the short journey home. However, she would have been fine on her Vetbed in the back of the car as usual.

Dinner was cooked white fish – Dan had recommended this saying Freya may feel a little queasy after the anaesthetic – and then she slept all night in her crate. We had reintroduced the crate in order to keep Freya contained and safe from damaging her internal stitches, essential to avoid ripping and infection.

Freya woke howling at 6 am and I suspected she was in pain as her normal wake up time was around 8 am. I prepped a breakfast of kibble, water and white fish warmed in the microwave with antibiotics mixed in as she had refused her usual dry kibble. 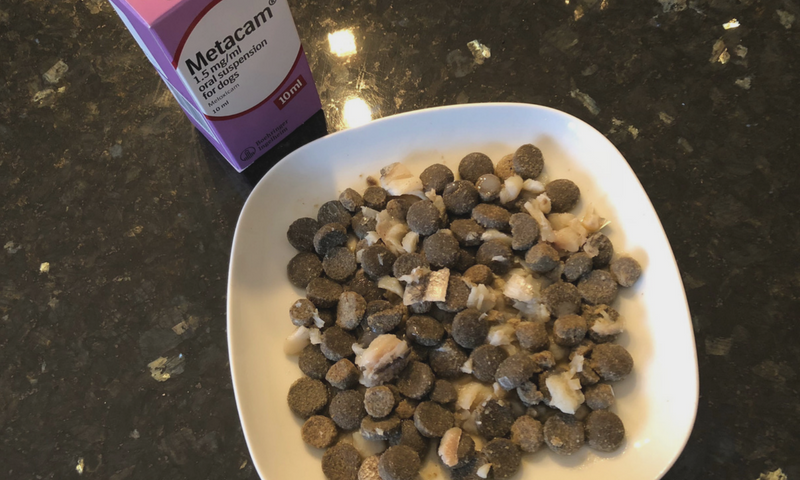 Her medicine prescribed a dosage every 24 hours, but I would advise breaking it down into two measures, one at breakfast and one before going to bed as I found this helped her get through the night without too much discomfort. I’d rung the vet to ensure this was OK and as long as I didn’t exceed the daily dose this was fine.

At dinner time I tried going back to dry kibble again, but Freya had lost interest in eating and, more crucially, drinking, so while convalescing I continued with the mix, eventually omitting the fish and just adding warm water to make a gravy. It was a couple of weeks before we were back on track with her normal dry kibble and water. 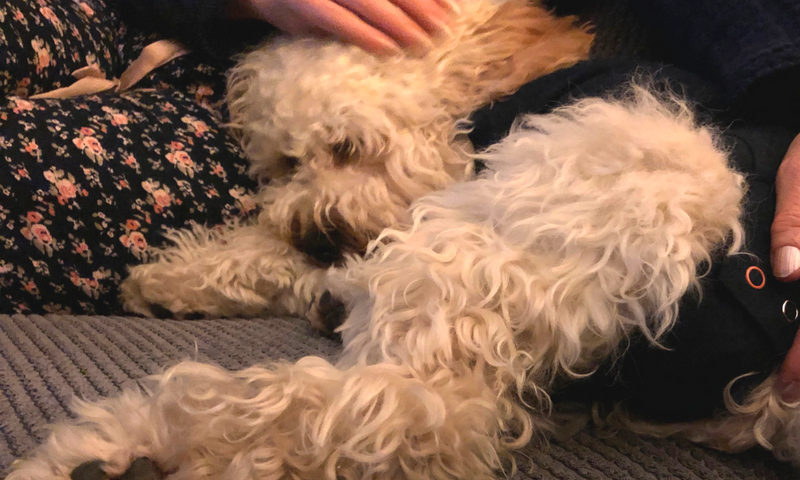 Once she had eaten she was pretty perky and I took her out on the lead into the garden while she went to the toilet. Freya had begun to constantly whine for attention, which I didn’t want to encourage, so I ignored this until she stopped and then gave her lots of cuddles and love encouraging her to rest. We enjoyed a ‘duvet day’ together watching movies (Freya loves Marley & Me) and generally she was very sleepy so not a problem. She initially settled in her crate that night, but began howling so we relented after 10 minutes and put her back in her bed. 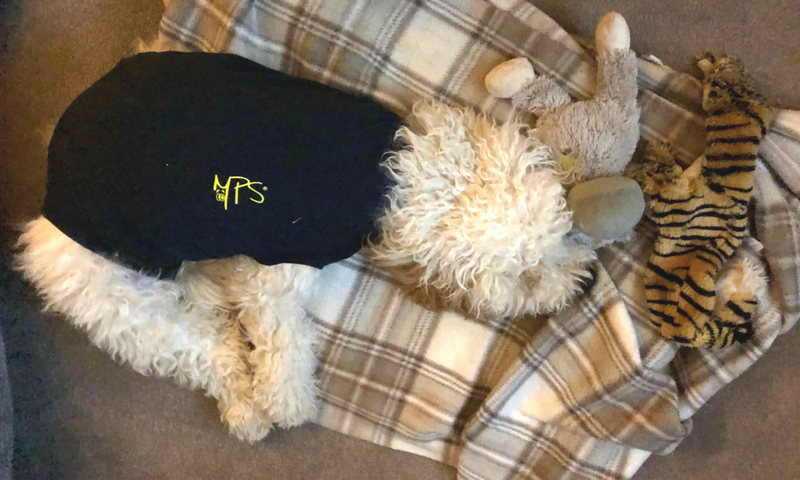 Freya woke early again and, with slight apprehension, I peeped into the kitchen. I needn’t have worried; Freya was nestled in her bed with hippo and tiger and didn’t appear to have spent the night partying. However, after her warm soupy breakfast, she just couldn’t understand why she wasn’t going out for her usual walks. It was the weekend and normally meant adventure time with a pub visit thrown in. (She was most indignant at the daily prescribed 10 minute toilet stroll.) Instead we chilled in the house and encouraged her to lie still with us. By lunchtime she was totally fed up puffing and sighing constantly to ensure we knew just how unimpressed she was.

Up with the larks once again but luckily it didn’t feel so bad as the clocks had gone forward so 6 am was 7 am – the loss of an hour was a bonus this year! To alleviate her boredom, sporting her medical vest we visited friends and we all went to the pub for lunch. 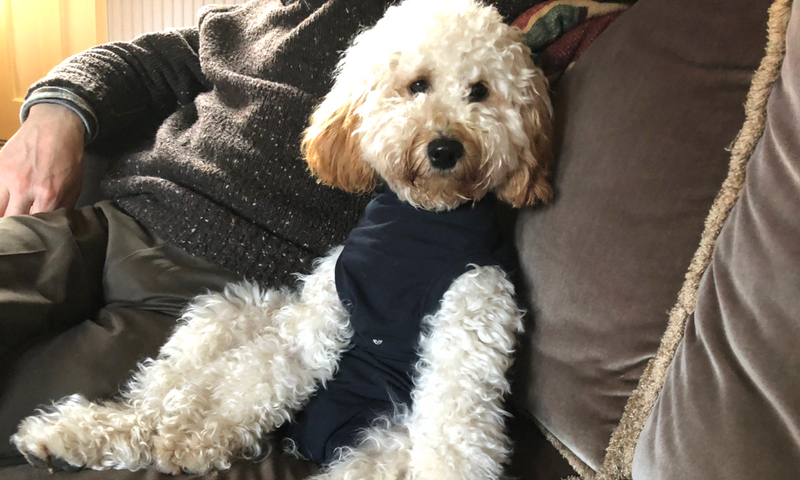 Freya woke us at 5:45 am (4:45 am in reality!!!). She’d begun intermittent howling, but as each bout was only for around 30 seconds we decided to leave her a little longer. I eventually relented but waited until she’d stopped howling before entering the kitchen to ensure she didn’t equate the howling with me arriving. Essentially she was just bored and full of beans with stored energy from being inactive over the last few of days. Today it was back to the vet to have the protective gauze removed and everything looked perfect. Phew! But Dan advised still no walking other than 10 minutes on the lead for the next seven days – we were both going to be stir crazy. 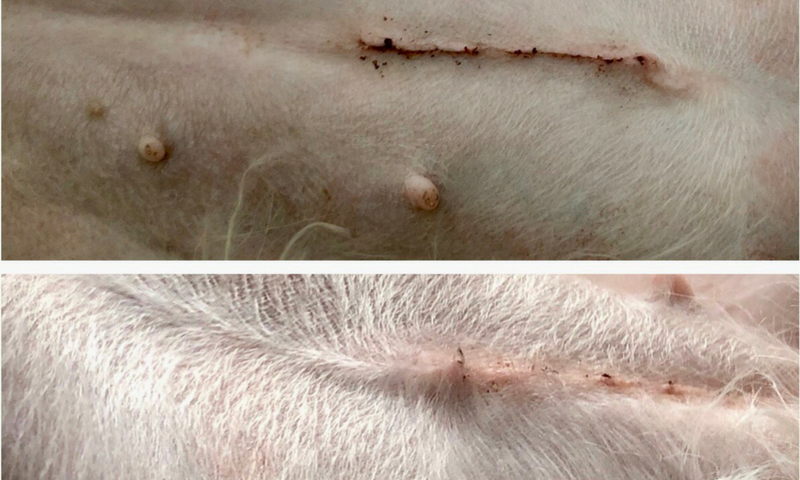 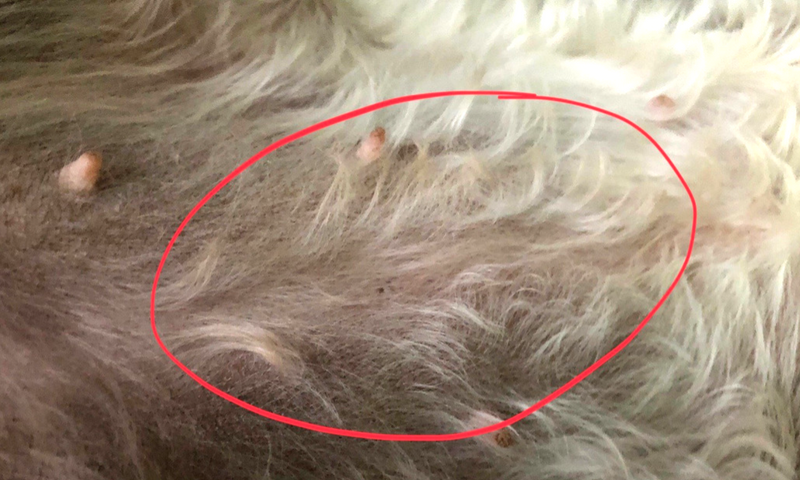 And so it continued counting down to Day 10

Despite my best efforts, Freya had adopted a ‘I feel sorry for myself’ whine which was now becoming habitual. This was not something I wanted to continue so each time it began I firmly said ‘no’. When she wasn’t attention seeking I gave her lots of cuddles so rewarded her for not whining. Essentially it became another week of movie fest and feature writing for a charity I was working with, but it was the longest week ever. I caught her several times jumping up on the sofa, but no damage was done and our first outing together was joyous. I removed the medical vest on day six but popped it on at night until the end of the convalescence period just to be on the safe side.

I have to say the worst part of the whole experience was keeping Freya entertained after day three. However, there were absolutely no issues once convalescence was over and two months later you can no longer see the scar and there are no after effects. However, if you think spaying will calm your cockapoo down though… I’m afraid I have to report Freya is just as crazy with her regular doodle dashes around the garden and, embarrassingly, her constant flirting with male dogs!

Freya is now two and a half and there have been no problems at all. I am now planning pup number two (female) and would do exactly the same again.

If you can, I would advise you choose the vest option rather than the cone; it’s miserable enough for them after the op without having to contend with this.

You can read more ‘Tips from the Experts’ on spaying and neutering here.

New research published in July 2020 gives a much greater insight into the best time to spay or castrate your dog. Follow this link for an edited version of the study.