Both Hilary and Ruth stressed the importance of early and continued puppy training, especially with a cockapoo. As a complete novice, I had no idea where to begin, but they said puppy training socialisation during the first 20 weeks was crucial. I needed to expose Freya to as many experiences as possible. It’s what’s known as the ‘imprinting stage’ and reduces a puppy’s fear factor as they mature.

Naturally no two dogs are the same and parentage does have an impact – a happy Mum during pregnancy and puppy rearing makes a great difference. Apparently, the ability of a dog to learn to be around humans and other dogs begins from four to eight weeks and should be well established by the time they are 12 weeks. Raffles are renowned for their ability to supply happy puppies and the team had already begun the process of socialisation. They had introduced Freya to other dogs and regularly handled and played with their puppies, so by the time we collected her, she was already very content to be around people. 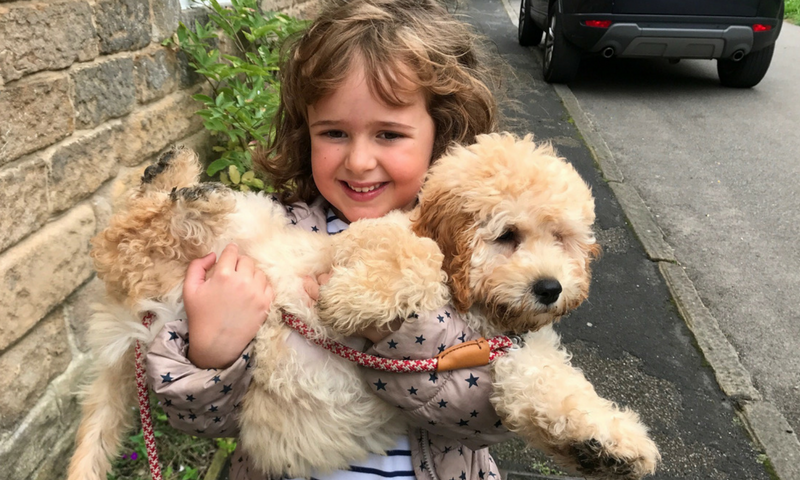 Other experiences I exposed Freya to included, meeting friends’ babies and children, heavy traffic, gun fire (we live in the country), horses, cows and sheep, tall men in black (although she is still skittish with this one), umbrellas, busy artisan markets and towns (carrying her), black dogs (something to do with the fact you can’t see their eyes), coffee shops and Pets At Home, visiting friends, etc. 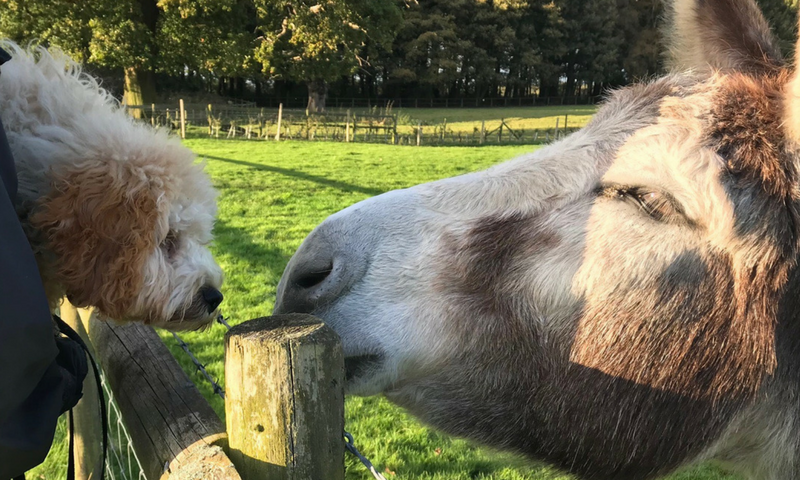 Freya had little self-control, a short attention span and was just as impulsive as my toddlers had been and so once again I used my experience of child rearing and applied it to puppy training. It meant starting as I meant to go on and to be consistent – this included my husband mirroring what I did so that she did not get confused.

At 14 weeks, we joined a puppy training class run by a Kennel Club trainer once a week for six weeks. Here we were taught the basics: her name; yes; no; come; sit; lead walking; hygiene; behaviour around dogs and people, including the three second rule. All Freya wanted to do for the whole six weeks was play with the other puppies – it was a battle to get her to do anything while she was straining and bouncing around the village hall (along with most of the other puppies), but it was useful to learn how to train and practice the simple skills at home.

We also took Freya along to an outdoor trainer based in a local country park every Saturday morning to reinforce some of the basics. These lessons cost just £5 and the idea was also to increase her socialisation exposure to other dogs. She was a nightmare desperately seeking the attention of the other dogs and we spent most of our time trying to restrain her. We ended up exercising her before we began the class in an effort to calm her down, but to no avail. The difficulty was that cockapoos have boundless energy, but you can only walk your puppy for five minutes for each month of their life, so at this stage it was just 20 minutes, twice a day!

Freya’s behaviour was getting progressively worse around people, demanding their attention and that of any dogs passing by. She would literally rear up and bounce on two legs when out walking on her lead, or when Mark came home from work, or friends and neighbours called in, she would chase round the house (classic doodle dash) yelping and whining, eventually spinning over and demanding belly rubs at their feet. The issue was she had had too much attention from people as a puppy and as a result now insisted on gaining any type of attention.

The cuteness factor of a puppy, let alone a cockapoo puppy, can be a real issue if they’ve received too much attention while very young. In my naivety, I thought it was a good thing for people to exclaim how pretty she was and to pet Freya; I thought this was all part of her puppy training socialisation, but with hindsight this was a mistake that is now taking a great deal of effort to train out of her. I’m writing this blog retrospectively and  Freya is now eight and a half months and improving, but it is a challenge.

My other tips during initial puppy training would be:

Do remember if your puppy does something wrong it is not his or her fault, it’s yours. They learn from you and if not gently corrected each and every time they will go on misbehaving – it’s really hard and sometimes, you think they are doing it on purpose, but they’re not, like toddlers they are just going through the learning process and it can be exasperating.

Consistency, repetition and positive reinforcement gets excellent results in the end. High quality treats (some use a clicker or favourite toy) really help. Keep with the positive training and praising good behaviour even when you are at the end of your tether. Puppies (and toddlers) can push you to the limits and patience is key, that and staying calm will reap rewards later. At eight months Freya is a delight; we still have a long way to go but of course she is still a young puppy, but at least I now have the hang of how to train positively and get results!

Dog Behaviour: Genetics and Social Behaviour of The Dog