As a first-time puppy owner, I had no idea that there was a limit placed on how long the first puppy walk should be. To me it made sense that a puppy would walk until it became too tired and then you picked them up and carried them. But oh no!

This topic was not mentioned in my Puppy Handbook – it felt a little like road signage, where the person who designed the route mapping knows where they are going and therefore it is easy to follow – dog owners assume that how much you can walk your puppy is automatically understood and are shocked when you show your ignorance.

Two weeks and several walks later, someone casually mentioned how the walking limitations was a real challenge when you owned an energetic cockapoo. “Walking limitations?” I asked. This is when I discovered that a puppy should only walk five minutes for each month of their early life – some say until 18 months, depending on the breed, as it takes longer for all the bones to develop to maturity. 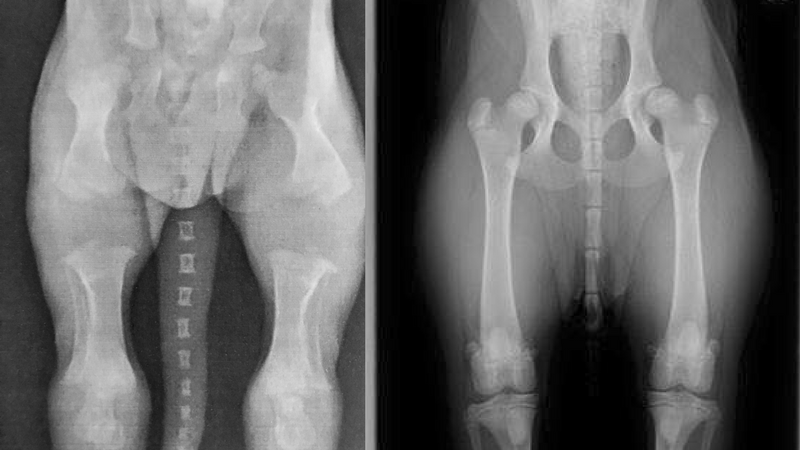 If you look at the x-ray on the left, you can clearly see how a two-week old puppy’s leg bones don’t actually meet their joints; the one on the right illustrates bone growth by six months.

It’s not just walking your puppy, they should also avoid any joint impact movement such as climbing stairs (there was a great deal of carrying Freya in the early days as our sitting room is on the second floor), anything that entails stopping abruptly, fetching balls, running on slippery surfaces, jumping off beds, sofas, out of cars, etc.

Over exercising your dog, or allowing them to put too much pressure on their hips and shoulders when they are not fully grown can damage their developing joints causing them to have arthritis or hip dysplasia in later life, or painful torn ligaments.

You can read more in the From the Expert article here.